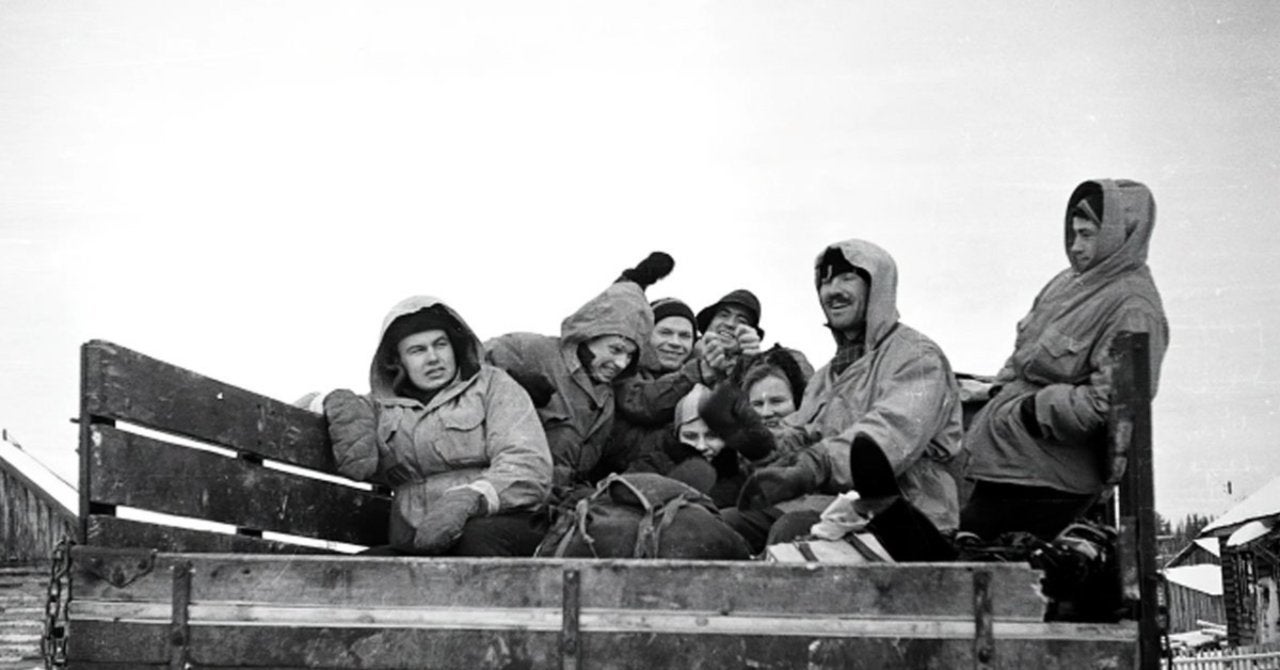 Internet sleuths, paranormal enthusiasts, and conspiracy theorists are all well aware of the Dyatlov Pass Incident, which is arguably the most famous instance of unexplainable deaths of the 20th century. For decades, whether it be out of an interest in the macabre or in hopes of actually solving the mystery, countless theories have emerged about what really happened on the fateful expedition, which even includes “official” explanations from the government. Not being happy with any of these answers, filmmaker Liam Le Guillou took it upon himself to dive headfirst into the mystery in hopes of finding answers, only to deliver a cohesive summation of the many theories, which mainly succeeds in conveying the gravity of the tragedy for those who might have only considered it an anecdotal mystery.

In 1959, a group of hikers went to explore the Dyatlov Pass in Russia’s Ural Mountains, with their failure to return when expected launching an expedition into their whereabouts, tragically resulting in the discovery of all nine of their bodies. With all of them in various states of undress, some in as little as shorts and most without shoes, in addition to peculiar physical trauma they suffered, a decades-long mystery ignited about what would cause these hikers to abandon their shelters in such little clothing, leading to their demise.

After a brief primer by Le Guillou about the tragedy in the film’s opening, one of the first sequences audiences see is Le Guillou himself exploring the ruins of Murphy Ranch in southern California, an infamous structure built in the 1930s as a safehouse for Nazi sympathizers ahead of World War II. If you’re wondering what this has to do with the Dyatlov Pass Incident, the answer is “nothing,” other than setting the stage for the more frustrating elements of the doc. Le Guillou fully admits he only happened across the mystery and had little personal connection to it, other than a passing interest. As a filmmaker, it’s clear he has many skills, but as the host of an investigative documentary, there’s much room for improvement. Rather than allowing the footage to speak for itself, or interjecting a voiceover narration and interstitials, Le Guillou is the driving force of the adventure, despite how little connection he has to it outside of his inquisitive nature. Given that a key component of the narrative involves Le Guillou’s quest to visit Dyatlov Pass, it’s hard to grasp why that matters, other than its potential personal impact on the filmmaker himself.

Outside of Le Guillou, the talking heads featured in the documentary do seem like trusted sources in their respective realms. Whether they be criminal pathologists or fellow enthusiasts of the mystery, the panelists offer seemingly reputable insight and they don’t entirely buy into the more outlandish theories regarding the deaths. In fact, it somewhat works to the film’s detriment that everyone who weighs in on the bizarre incident buy into there being some sort of foul play. While it’s possible that this is a result of just how strongly the evidence points towards a cover-up, having even one voice who could potentially refute claims of government erasure of the tragedy or a violent attack would have lent credibility to the more mysterious elements of the event.

An Unknown Compelling Force does manage to succeed in one significant arena, which is in how it humanizes the victims of the tragedy. While anyone familiar with the situation might merely have a fascination with the more bizarre theories regarding the deaths, this film reminds us that these nine people weren’t merely elements of an unexplained event, but a group of friends who had their whole lives ahead of them, only for those lives to be cut short. They had hopes and dreams, friendships and relationships, all of which ended tragically and by something that we might never know about. It’s hard to watch this film and come out the other side unchanged, merely tossing out the story as something you make conversation about whenever the topic of true crime or strange events comes up at a dinner party as a strange anecdote. These deaths are often just referred to as an “incident,” but viewers will surely only perceive it as the “Dyatlov Pass Tragedy.”

Along those lines, as anyone who looks into what happened on Dyatlov Pass can tell you, there are a number of wild theories out there, due to the horrifying condition the bodies were recovered in. The nature of the remains has earned the tragedy incredibly extreme explanations, including UFOs, a Yeti, or some other paranormal encounter. Much like how the film helps humanize the victims, it also gives those paranormal explanations as much screen time as they deserve, which is virtually none. The film might not come to a definitive conclusion about the events, it helps ground the tragedy in the reality, offering a variety of explanations regarding likely events as opposed to being the result of an otherworldly encounter.

The film’s title comes from the “official” explanation for why the hikers died, as authorities cite “an unknown compelling force” for the cause of the deaths. This investigation is undoubtedly compelling, due to the real-world facts about the case, with the film luckily leaning into those elements of the story more than the otherworldly explanations. Due in large part to how much time has passed since the tragedy, we’ll likely never know what really happened, with An Uknown Compelling Force at least making for a serviceable introduction to incident, even with the inclusion of the filmmaker’s personal quest serving as a distraction from the more fascinating components of the documentary.

An Unknown Compelling Force will debut digitally on June 15th.