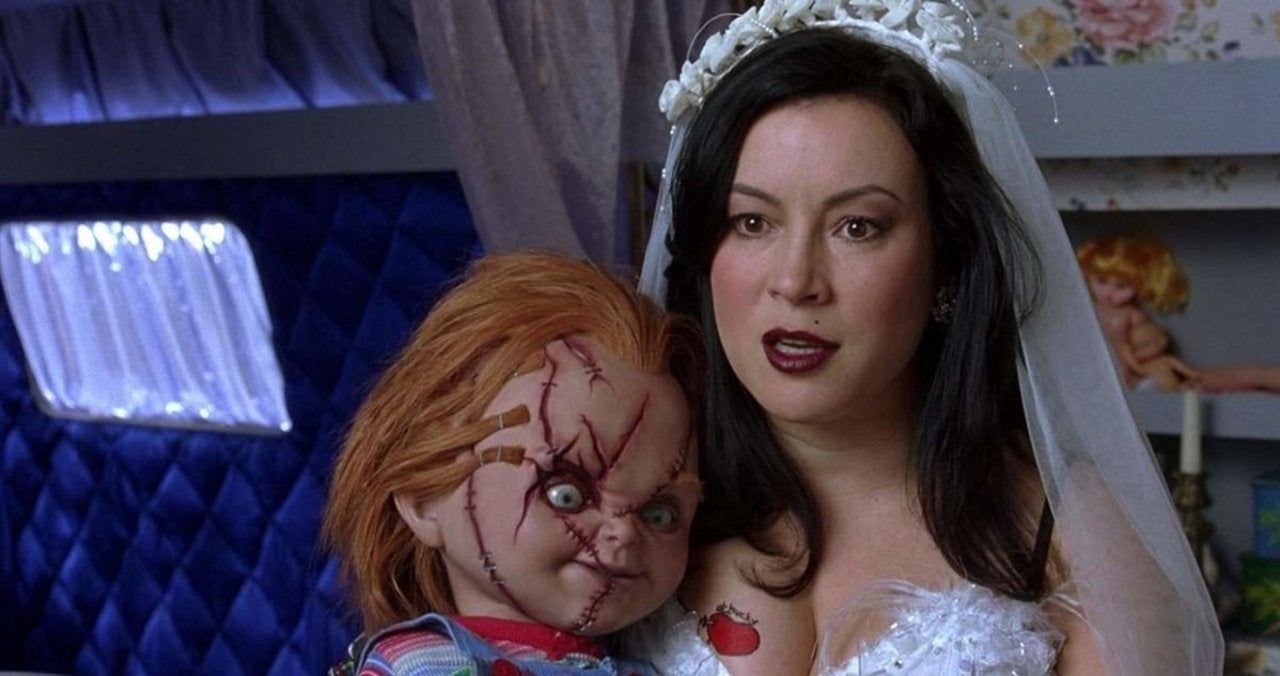 Production on the upcoming Chucky TV series is ongoing and one of the newest members of the family has shown just how close he’s gotten to one of his new friends ’til the end. Actor Devon Sawa, making his leap to the Chucky franchise from the Final Destination films, posted a photo of him with returning star Jennifer Tilly. The 62-year-old actress made her first appearance in the series with 1998’s Bride of Chucky playing the part of his lover, Tiffany Valentine, and later as both Tiffany and herself in 2004’s Seed of Chucky sequel. Check out the photo below!

To make things even more meta than you may realize, Tilly’s appearance as herself in Seed saw her the target of evil doll Tiffany, who transferred her soul from the doll into Tilly (so Tilly is playing Tiffany who is inside Tilly’s body). Though absent from 2014’s Curse of Chucky, Tilly returned both in-person and in doll form as Tiffany at the end of Cult of Chucky, setting the stage for the upcoming TV series and raising some interesting questions about the larger mythology of the entire franchise.

Tilly is just one of several key cast members that are returning for the new show, most importantly the man himself, Brad Dourif, as the voice of Chucky, and series creator Don Mancini, who has written all of the films in the main series. Dourif’s real-life daughter Fiona Dourif will also reprise her part from the sequel movies Curse of Chucky and Cult of Chucky along with original Child’s Play star Alex Vincent returning to the role Andy. Actress Christine Elise McCarthy, who took on the part of Andy’s foster sister Kyle in Child’s Play 2, will also appear.

Sawa leads the cast of newcomers to the series though which also includes Lexa Doig (Arrow), Zackary Arthur (Transparent), plus Teo Briones (Ratched), Bjorgvin Arnarson (PEN 15), and Alyvia Alyn Lind (The Young and the Restless) as the series’ “four young leads.”

The official description for the Chucky TV series reads: “After a vintage Chucky doll turns up at a suburban yard sale, an idyllic American town is thrown into chaos as a series of horrifying murders begin to expose the town’s hypocrisies and secrets. Meanwhile, the arrival of enemies and allies from Chucky’s past threatens to expose the truth behind the killings, as well as the demon doll’s untold origins as a seemingly ordinary child who somehow became this notorious monster.”

Chucky will premiere this Fall on SYFY and USA Network.