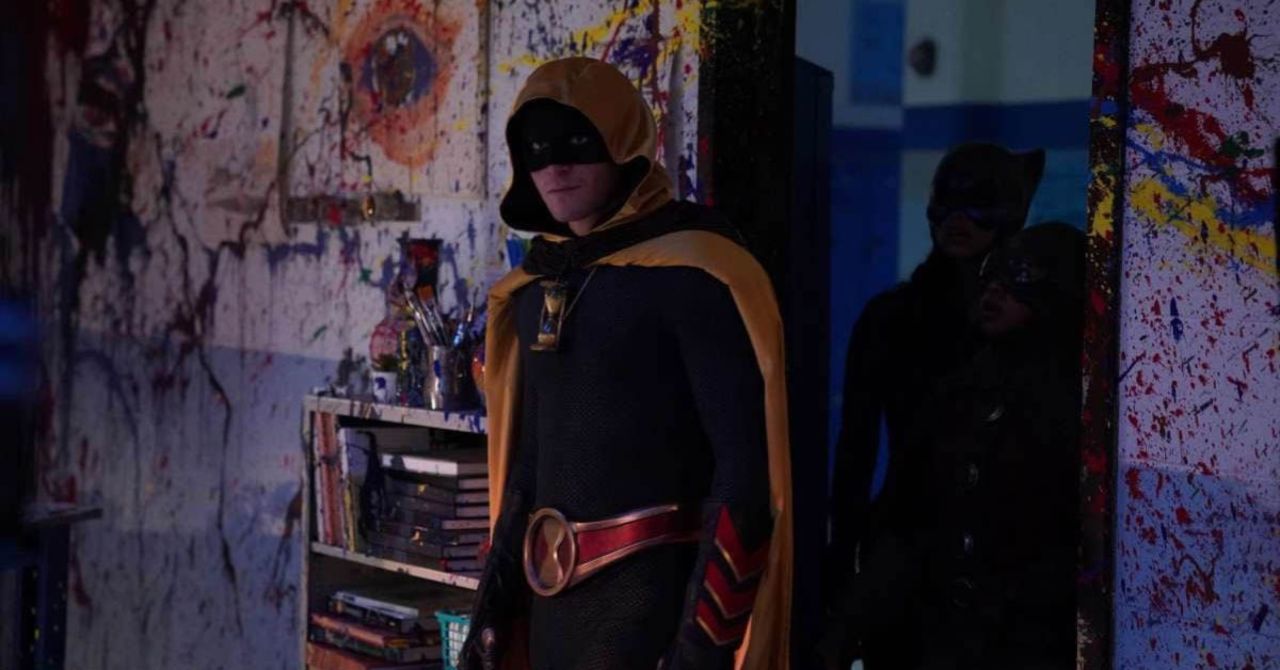 The second season of DC’s Stargirl is in full swing and so is the Justice Society of America’s investigation into Eclipso. Last week, Beth (Anjelika Washington), Rick (Cameron Gellman), Yolanda (Yvette Monreal), and Courtney (Brec Bassinger) learned about the history of Eclipso and a place called Devil Island, but Courtney also learned something else truly chilling about the entity. The Shade (Jonathan Cake) told her that Eclipso killed Charles McNider’s young daughter, giving the heroes their first real idea of how sinister a threat they are truly facing.

This week, dark clouds start to gather over Blue Valley – literally – as all signs being to point that Eclipso may be closer than the young heroes think. At the same time, Cindy (Meg DeLacy) goes for her next recruit, but things may not work out quite the way she expects them to.

Need to get caught up on the latest plot details of DC’s Stargirl? We’ve got you covered. Read on for our full-spoiler recap of “Summer School: Chapter Five” below but if you haven’t yet seen the episode and don’t want to know everything just yet, turn back now. There are plenty of big spoilers beyond this point.

The episode opens with a flashback to ten years ago in California. A young Cindy wakes up screaming and her mom comes to her. She had a nightmare about her father, that he wanted to change her. Cindy’s mother promises her that he won’t find them. However, after her mother leaves, Dragon King emerges from the shadows.

In the present, Cindy is still troubled by what happened with her stepmother as well as the vision of her mother from last week. She prepares to recruit Cameron Mahkent, but his grandmother warns her to stay away, telling Cindy she’s a monster just like her father. Cindy calls Jordan a loser, and Grandma gets very frosty.

Courtney returns home and is confronted by Pat. She tells him that she was looking for The Shade because he was more honest with her than Pat has been. She wanted to team up with The Shade. Pat tells her that they don’t need The Shade to find Eclipso. The weather will help them find him and shows her the weather for the state. Everywhere except Blue Valley has had clear skies and sunshine. Pat thinks Eclipso is there in Blue Valley. He tells Courtney The Shade is not on their side. She presses him for more information, but he tells her there is nothing else.

Cameron continues to work on his mural. It’s of his father and Cameron talks to it, though the weather starts to grow more volatile prompting him to head to the school. He encounters Mr. Deisinger and asks to use the studio. Cameron drops his sketchbook and the teacher picks it up, revealing that Cameron has been drawing Courtney. She’s his muse. Courtney and Yolanda arrive. Cameron tries to stay cool. Mr. Deisinger encourages Cameron to show her the art.

In the studio, Cindy is waiting for him. She offers him condolences, but he won’t’ hear it. He reminds her of what she said when her mom died, that she told everyone “I never liked her anyway” about her own mother. He says she’s never been sorry about anything. Mr. Deisinger shows up and brings Cameron his sketchbook, prompting him to leave so Cindy uses the Black Diamond on the teacher.

The Shade is waiting for Barbara in her office. She confronts him. He tells her she reminds him of a family member of his, but he’s there to tell her to have Courtney stop interfering. The Shade tells Barabara that the weather is only the prelude to things with Eclipso and they don’t want to see the finale. He tells her that Courtney and her friends are too young to deal with this. He is warning them, for safety, and suggests that if Courtney figures out the location of the diamond, Barbara should let him know. Suddenly, The Shade’s business card develops a contact number.

Rick is driving, listening to news reports about the decrease in ‘bear attacks” and has flashbacks of his parents’ deaths as he does so. He comes up on Cameron painting his mural, stopping to stare for a moment before driving off. At the garage, Beth tries to tell Pat that Doctor Mid-Nite is alive in the shadows. Pat dismisses her, warning that it could really be Eclipso as he can make them see and hear things, as well as fear and want. Rick wants to know what if Beth is right. Pat says if he is alive, they won’t rest until they find him, but they have to find the Black Diamond as their first priority.

At school, the teacher is struggling a bit, coughing. He excuses himself and coughs up paint in the studio.

Pat and Barbara go to the junkyard where they find Mike and Zeke. Mike was trying to buy an old station wagon. He had the idea that once fixed up it might make a good getaway car for the team. Pat lectures him about it and again discounts his attempts to help. After a moment, though, Pat says they should find a JSA project to work on together, which brightens Mike right up.

Courtney goes to talk with Cameron at his mural after school. He shows her his sketches of her. She goes with him to his house where they talk and share a tender moment. Cameron almost kisses her but they’re interrupted when Courtney gets a text message. Cameron is upset as she stood him up last year, but she promises him this is the last time.

Meanwhile, at the school, Eclipso tells Mr. Deisinger he has been blessed and then makes him see something, prompting the teacher to start frantically painting. Outside, the weather patterns seem to be centering right over the school so the team suits up and heads inside, having noticed Mr. Deisinger’s car. They soon encounter the studio absolutely splattered in paint with multiple black diamonds painted on the walls and surfaces, one of them particularly ominous. When Yolanda picks up a painting, it appears to be of Brainwave and she hears his voice. Her headaches returning. As she screams out, a face begins to emerge from the diamond painted on the wall.

The JSA realizes they’re dealing with Eclipso as the entity begins to spread from the wall. Rick punches his way out of the studio, but in the hallway, locker doors open, and both Yolanda and Rick are tormented with visions – Yolanda of Brainwave and Henry, Rick of Solomon Grundy. Beth is also tormented about her family falling apart. As they melt down, Courtney is the only person unaffected and watches as the entity begins to spread. She uses her staff to blast it back and discovers Mr. Deisinger possessed by it. He attacks her, saying he sees only darkness. She tells him he needs to see the light and blasts him with the light of her staff. She tells him to grab the light and when he makes contact with the staff, the darkness and Eclipso are driven away.

At the shop, the team tries to process what they’ve been through. Mr. Deisinger is getting psychiatric help. The team explains to Pat that he didn’t have the Black Diamond and Pat tells them that Eclipso is getting stronger with powers spreading beyond the Black Diamond.

At Beth’s house the next day, she confronts them and tells them she knows about the divorce papers. They tell her that they haven’t decided to go through with it yet. Her parents tell them that they will talk later about everything as a family.

At the ISA headquarters, Cindy explains that they will no longer be recruiting Cameron. There is just one more piece of the puzzle they need and she slides the photo of Mike Dugan across the table.

At the mural, while Cameron is painting, he begins to manifest his own ice powers.