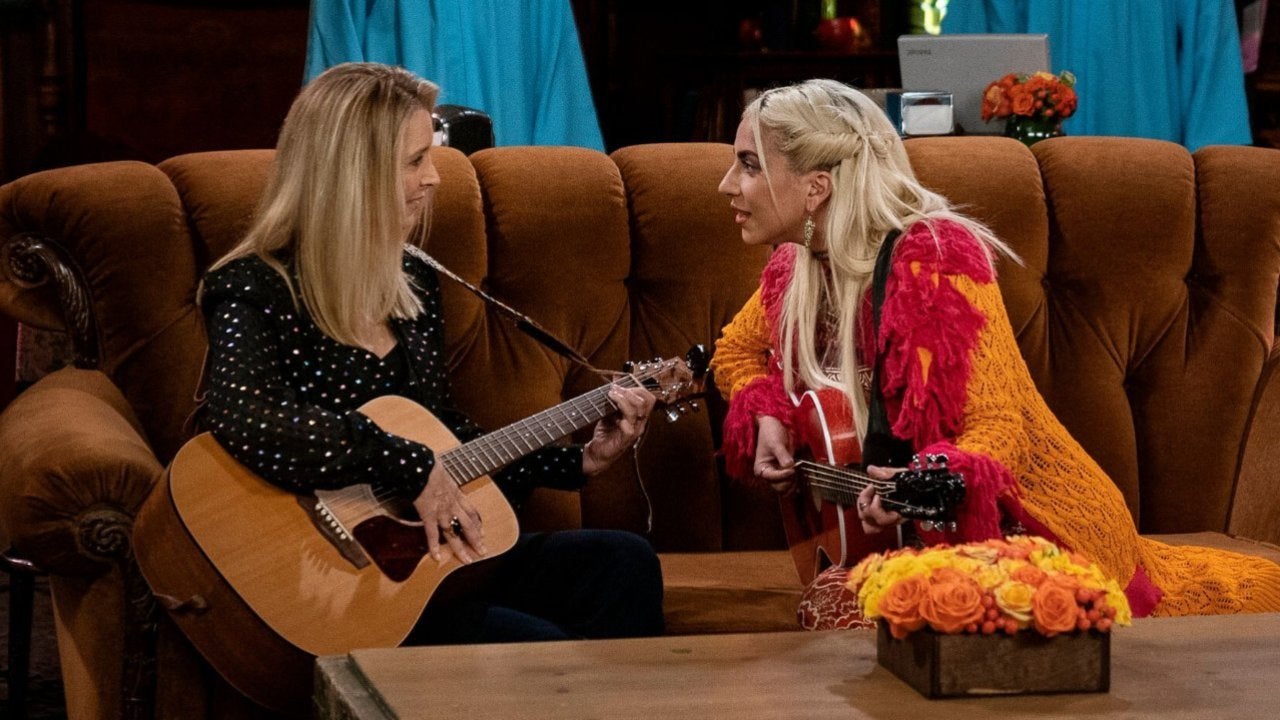 Friends: The Reunion is now streaming on HBO Max and it features tons of touching moments with Jennifer Aniston (Rachel Green), Courteney Cox (Monica Geller), Lisa Kudrow (Phoebe Buffay), David Schwimmer (Ross Geller), Matt LeBlanc (Joey Tribbiani), and Matthew Perry (Chandler Bing). There were also many guests in the special ranging from former Friends guest stars to celebrities who love the sitcom, including Lady Gaga. The superstar showed up to sing Phoebe’s famous song “Smelly Cat” alongside Kudrow, much to the delight of the Internet. During a recent appearance on The Ellen DeGeneres Show (via Entertainment Weekly) Kudrow talked about her emotional encounter with Lady Gaga and revealed she had to re-learn the infamous tune.

“I was really nervous when I first heard that. And then I prepared. I realized I had to learn ‘Smelly Cat’ again. I tuned my guitar and realized I don’t know the chords,” Kudrow admitted. “All the chords were there for ‘Smelly Cat!'” Kudrow added with a laugh. “So thank you world, for posting the chords.” She continued, “I learned it, and then my throat closed … I was so panicked! I couldn’t get anything out! I didn’t know what was going to happen.”

“That really almost made me cry,” Kudrow said of the moment when Lady Gaga thanked her for playing Phoebe and for representing people who are different. “That blew me away. Also coming from her, because my son was in grade school, all the kids were listening to Lady Gaga and her whole message was everyone be yourself and just be you. That was amazing.”

As soon as the special aired, Kudrow delighted fans by sharing a photo on Instagram with her and Schwimmer hanging out to watch it together. “Tonight….That’s how long we waited to get together. Thanks @_schwim_,” Kudrow wrote.

Last year, Kudrow spoke to THR about the special and explained why it wasn’t going to be on Zoom like so many other reunions we’ve seen over the last year. “We haven’t all been in the same room in front of people — I mean, we have privately once many years ago but that’s it. The whole point of this is to be in the same room. That hasn’t changed. And HBO Max is being phenomenally patient and understanding,” Kudrow explained.

Did you enjoy watching Lady Gaga sing with Kudrow during the Friends reunion? Tell us in the comments!

Friends: The Reunion, as well as the original sitcom, is available to watch on HBO Max.