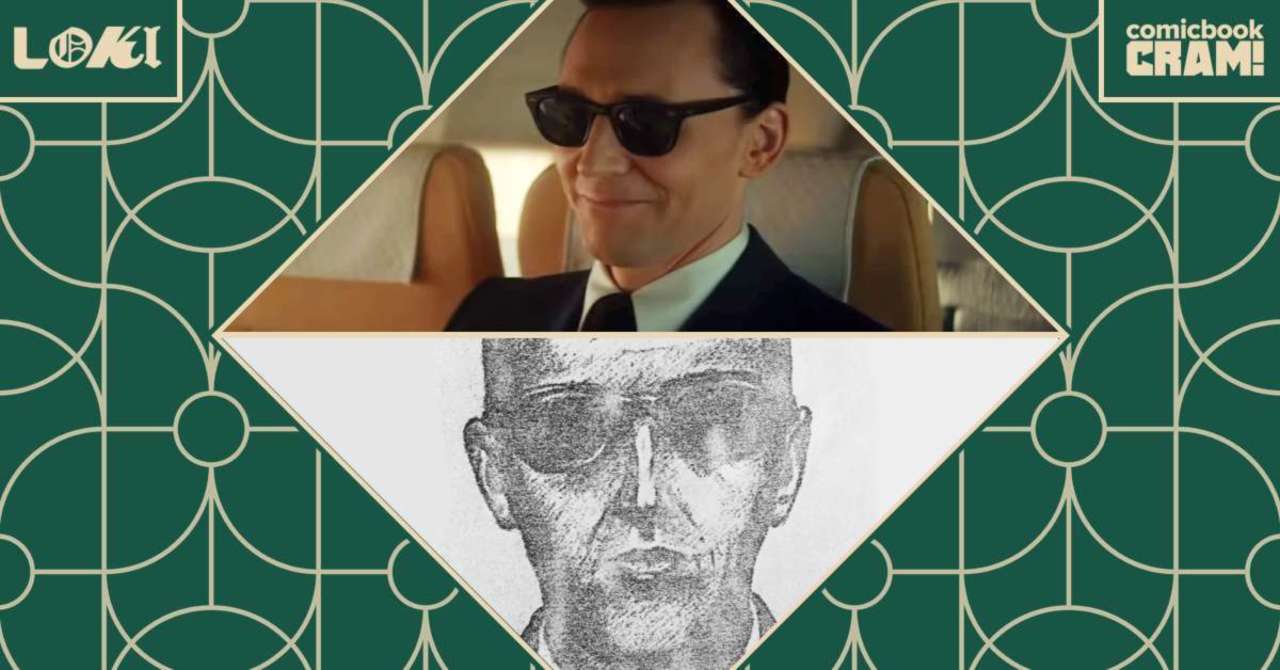 When the Loki trailer was released late last year fans were excited to get a look at the highly-anticipated Marvel series coming to Disney+ as well as what secrets it might reveal about what’s next for the God of Mischief after his Avengers: Endgame theft of the Tesseract. While most pored over that trailer looking for clues to what comic book stories the series might adapt, there was another reference that stood out, one that connects not to comics but to the real world and a long-unsolved crime. Amidst the trailer showing Loki (Tom Hiddleston) being enlisted into the TVA (Time Variance Authority) was a moment that shows a sunglasses-clad figure jumping from a jetliner with a bag of cash in what seems to be a reference to the 1971 plane hijacking carried out by D.B. Cooper.

Who is D.B. Cooper and did Loki just “solve” one of the biggest mysteries in American true crime? Let’s break down the infamous and mysterious case.

On November 24, 1971 — the day before Thanksgiving — a clean-shaven, middle-aged man dressed in a black business suit and carrying a black briefcase walked up to the counter of Northwest Orient Airlines at the Portland International Airport, identified himself as Dan Cooper, and purchased in case a single one-way ticket on Flight 305 to Seattle, Washington. He took a seat, ordered a drink, and the flight — which was only around one-third full — took off from Portland on time at 2:50 p.m. Shortly after, Cooper alerted a flight attendant that he had a bomb.

Cooper then made his demands. He wanted $200,000 in “negotiable American currency”, four parachutes, and a fuel truck standing by in Seattle to refuel the plane. It took approximately two hours for authorities to assemble Cooper’s demands and it’s reported that he remained calm and even polite and pleasant during the entire time and seemed very familiar with the area and terrain. After his demands were met, all passengers and most flight attendants had left the plane, and his very specific flight plan with a course toward Mexico City at the lowest possible airspeed with the cabin to remain unpressurized, the flight took off again at 7:40 p.m. Approximately half an hour later, Cooper exited the plane over Washington state in flight from the aft airstair and simply disappeared.

While the investigation began immediately, though a precise search area was difficult to pin down and no trace of Cooper or the equipment he used was found. In fact, very few pieces of evidence from the hijacking were ever recovered. There were a few items left behind on the plane — specifically Cooper’s clip-on tie and tie clip — but the rest of the evidence was found much later. In 1978, a placard with instructions on how to lower the aft stairs of a Boeing 727 was found by a deer hunter along the basic flight path of Flight 305 and then, in 1980, eight-year-old Brian Ingram found three packets of the ransom cash near the Columbia River.

As for the identity of Cooper, an error in an early media report caused “Dan Cooper” to be published as “D.B. Cooper”, the name that the public soon associated with the event, but who Cooper really was has never been determined — nor has his fate. Some have speculated that Cooper didn’t survive his jump from the plane, though between 1971 and 2016 the FBI processed many serious suspects — including one suspect who had been involved with a very similar hijacking just four and a half months after the Cooper incident. The case remains open, though the FBI official suspended active investigation of the case in July 2016.

While the crime remains unsolved, the case and D.B. Cooper have remained a popular subject in the wider American culture. The case has been mentioned in numerous novels, comics, films, songs, and television series of which Loki will be the latest. The teaser shows the God of Mischief seemingly in the guise of Cooper, jumping from the plane before disappearing into the Bifrost, something that certainly makes for an interesting way to solve the decades-old crime.