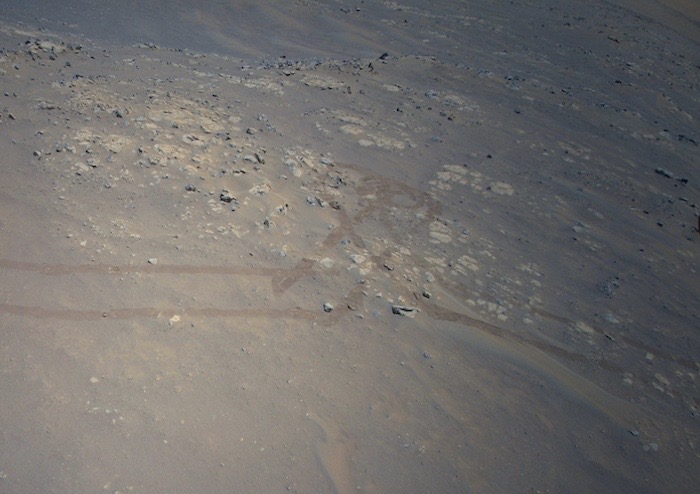 Is there something going on between Perseverance and the Mars helicopter Ingenuity?

During its latest Red Planet flight on Monday (July 5), NASA’s 4-lb. (1.8 kilograms) Ingenuity Mars helicopter photographed a heart-shaped feature among the tracks made by the six-wheeled Perseverance rover.

The “heart” shows where the Perseverance rover took a slight detour, perhaps to investigate some interesting rock or patch of dirt, before returning to its original path and heading on its way. Or, if your inclinations run in a less literal, less factual direction, the ground-bound robot was sending a message of support (or more) to its aerial partner.

The car-sized Perseverance rover landed, with Ingenuity attached to its belly, this past February on the floor of Mars’ Jezero Crater, which harbored a big lake and a river delta in the ancient past. In early April, the little chopper deployed onto the red dirt, kicking off a month-long, five-flight campaign designed to show that aerial exploration is feasible on the Red Planet.

Ingenuity aced that original technology-demonstrating mission and was rewarded with an extension, which aims to showcase the scouting potential of Mars rotorcraft. For example, the Perseverance team is looking forward to studying the photos Ingenuity captured on Sunday’s sortie, which flew over a rugged region called “Séítah,” the helicopter’s handlers said.

“They also include a system of fractures the Perseverance team calls ‘Raised Ridges,’ which the rover’s scientists hope to visit in part to investigate whether an ancient subsurface habitat might be preserved there,” wrote Grip and Williford, both of whom are based at NASA’s Jet Propulsion Laboratory in Southern California.

“Finally, we’re hoping the color images will provide the closest look yet at ‘Pilot Pinnacle,’ a location featuring outcrops that some team members think may record some of the deepest water environments in old Lake Jezero,” the duo added. “Given the tight mission schedule, it’s possible that they will not be able to visit these rocks with the rover, so Ingenuity may offer the only opportunity to study these deposits in any detail.”

Perseverance’s main mission goals involve hunting for signs of ancient Mars life on Jezero’s floor and collecting and caching samples for future return to Earth. The rover began focusing on that science work in earnest when Ingenuity completed its original technology-demonstrating mission. (All communications to and from Ingenuity must go through Perseverance.)

Ingenuity’s extended mission is expected to last at least a few more months, provided the helicopter remains healthy, with a flight roughly every two weeks on average during that span. The helicopter team has been pushing Ingenuity’s limits during the extended phase, as the latest flight showed. On Monday, the copter flew farther (2,051 feet, or 625 meters) and faster (about 11 mph, or 18 kph), and stayed aloft longer (166 seconds), than it ever had before.

Hercules, the mighty strongman of the summer sky

NIL Could Complicate Matters On The Academic Side, Educator Warns