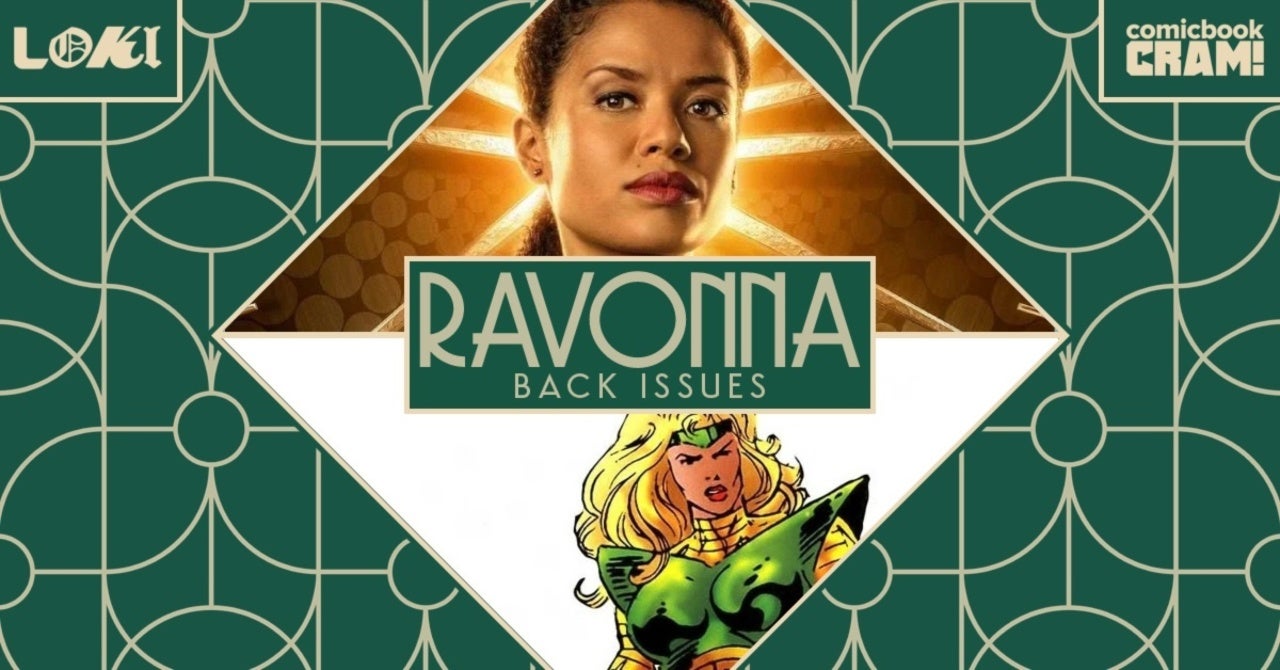 Alternate realities — and alternate destinies — come up pretty often in the pages of Marvel Comics, with an ever-growing number of tales diverging from fans’ expectations of canon. No character might understand that quite like Ravonna Renslayer, whose sporadic history across Marvel titles is filled with an almost dizzying number of different codenames, switcheroos, and changes in reality. Since her creation by Stan Lee and Don Heck in the 1960s, Ravonna has been a lot of things — a princess whose life is intricately intertwined with Kang the Conqueror, and a formidable and headstrong player in her own right. Ahead of Ravonna’s live-action debut, with Gugu Mbatha-Raw portraying her in Disney+’s Loki, let’s break down her complicated comic history and why it matters.

Ravonna’s first comic appearance, in 1965’s Avengers #23, occurred at a pretty complicated time for the titular team, as its heroes — Hawkeye, Scarlet Witch, and Quicksilver — were struggling to move forward as a team after Captain America quit. Smack-dab in the middle of this was an unconventional courtship process between Kang and Ravonna, who was the princess of a kingdom in the 40th century that he had aspirations to conquer. The only thing that stopped Kang from brutally taking over Ravonna’s kingdom and killing her father was Ravonna herself, who Kang had developed romantic feelings for, but she did not reciprocate because she didn’t see him as royalty. In an attempt to win her affection, Kang brought the Avengers into the 40th century, in hopes that his ability to fight them would impress her (which, in the grand scheme of things, is definitely among the most unique ways Marvel supervillains have tried to win over their love interests).

While Kang did largely succeed in fighting the Avengers, Ravonna walked away from the fight being more impressed by Earth’s Mightiest Heroes, and asserting that she could have grown to love Kang if he hadn’t been such a tyrant. Kang eventually gave up and decided to invade her kingdom anyway, and Ravonna fought alongside the Avengers in the ordeal that ensued, even as Kang still tried to make her his bride. When one of Kang’s generals, Baltag, decided to lead an uprising, Kang briefly joined the side of Ravonna and the Avengers, something that impressed the princess. In one last-ditch effort to gain power, Baltag shot a bullet in Kang’s direction — which Ravonna jumped in front of, saving his life. As Ravonna neared death, she revealed that she did, in fact, love Kang.

What started out as a textbook example of “women in refrigerators” led to some unexpected storylines for Kang — and eventually, Ravonna herself. After Ravonna’s death, Kang placed her into a stasis chamber and began to search the cosmos for a way to bring her back to life. He eventually got his answer during a tournament put on by the Grandmaster, which would grant the winner the power of either life and death. After Kang partially won the tournament, he decided to use the power of death in an (ill-fated) attempt to kill the Avengers — a decision that would later be relayed to Ravonna, after the Grandmaster revived her. This “Prime” version of Ravonna began to resent Kang, and decided to get revenge on him however possible.

At the same time (thanks to a fight between Kang and Thor, which split Kang into two simultaneous iterations of himself), the “Prime” version of Kang was sent into Limbo, where he used that realm’s technology to rescue an alternate version of Ravonna from seconds prior to her death. This came at a cost, however, as it created a divergent reality where Kang himself had died as a result, a fact that disappointed Kang. Nevertheless, the pair ruled Limbo and developed a romantic relationship, only for it to be revealed that Ravonna was secretly working for Immortus, Kang’s future self, who had orchestrated an intricate plan to get Kang to murder the other versions of him in alternate realities. In an emotional sequence of events, Ravonna argued that Immortus was all that is good about Kang, and betrayed him.

Meanwhile, “Prime” Ravonna went on to become a vengeful assassin, who tried to influence members of the Avengers to help her get her revenge on Kang. This included a whole ordeal where Ravonna impersonated Nebula (yes, that Nebula) to infiltrate the Council of Cross-Time Kangs, which accidentally led to her and then-Avengers member Doctor Druid falling into a timestorm. Still assuming Nebula’s identity, Ravonna tried to get the Fantastic Four to help her, but to no avail. When Ravonna did escape the timestorm, she ended up in Lincoln, Nebraska in 1961, where she and Doctor Druid eventually agreed to join forces to fight Kang. After making her way to Kang’s main kingdom, Chronopolis, Ravonna assumed the name of Terminatrix, sported a more armored costume, and challenged Kang in a duel — one that led to Kang sacrificing himself to save her, just as she had done for him years ago. As a result, Ravonna became the ruler of Chronopolis, a challenge that then became the events of the Avengers: The Terminatrix Objective miniseries. Ravonna’s relationship with Kang wasn’t completely over, however, as she would resurrect him twice out of boredom — first to stab him in the heart, and then to properly reconcile with him. While Prime Ravonna ultimately refused Kang’s proposal of marriage, yet another alternate version of Ravonna was introduced who did accept his proposal, who went by the name of Revelation.

Given how much Disney+’s Loki is expected to deal with alternate realities, it’s hard to deny that Ravonna is a pretty perfect fit for the series. While we know very little about the television version of Ravonna, outside of the fact that she is operating as a judge for the Time Variance Authority, there’s certainly no shortage of source material to inspire her live-action story. And with Kang confirmed to be appearing sooner than later in the MCU’s future, there’s also a chance that we could see their oft-doomed dynamic — and Ravonna’s quest for revenge — brought to life as well.

The World Needs Deepfake Experts to Stem This Chaos