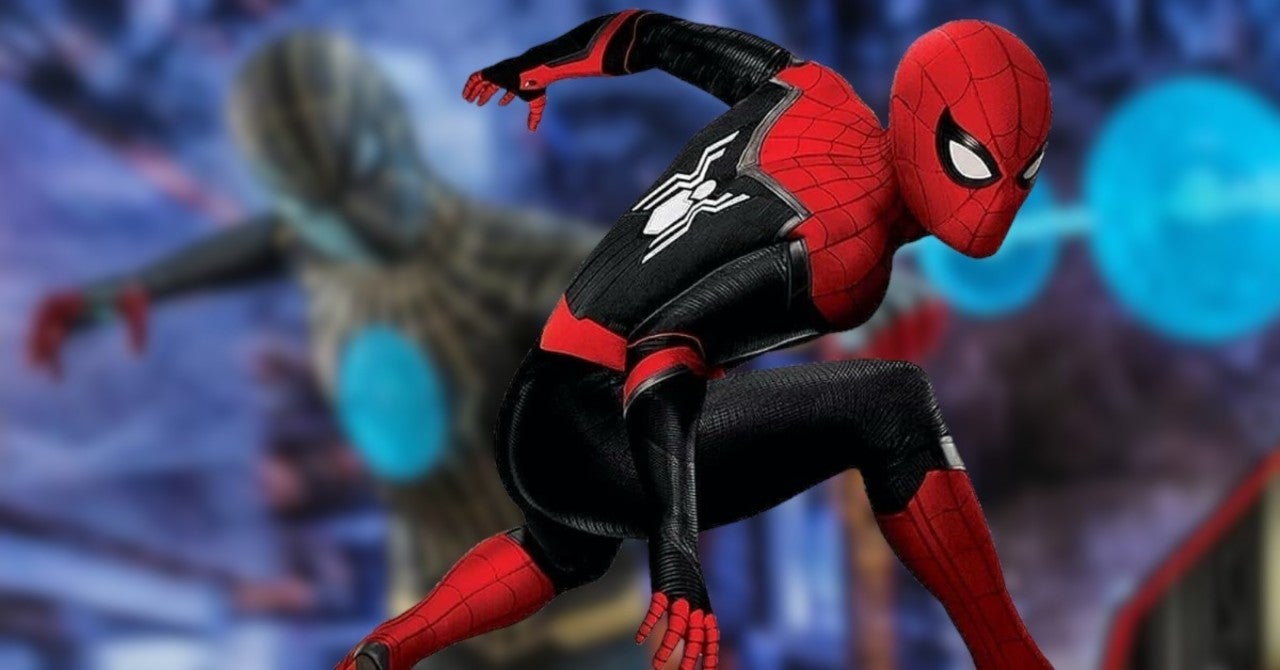 Spider-Man: No Way Home‘s new Spider-Man costumes leaked on the Internet and have since gone viral. One that has really stood out is the new black-and-gold suit that Tom Holland’s Spider-Man will wear in the film. It’s a design that seems to pay homage to several suits from Spider-Man comics and games – but now we’re learning that it may also have some unique new powers, as well. The source is – as usual – the merchandising surrounding Spider-Man: No Way Home, this time a Hot Toys release of the new black-and-gold suit, which comes with the following caption of the suit’s functions and powers:

The friendly neighborhood super hero has continued to share new looks in multiple movie appearances, and got fans amazed with his upgraded gadgets. To prepare fans for the Spidey’ return, today Hot Toys is ecstatic to introduce Spider-Man and his new Black & Gold Suit, one of the new suits that will be seen in the movie, as 1/6th scale collectible figure ahead of the release of Spider-Man: No Way Home.

Expertly crafted based on the appearance of Tom Holland as Peter Parker in the movie, the latest Spider-Man figure features a head sculpt with stunning likeness, a masked head sculpt with multiple pairs of interchangeable Spider-Man eye pieces to create numerous Spider-Man’s expressions, a beautifully designed Black and Gold Suit with detailed web patterns, a selection of highly detailed accessories including a gauntlet, mystic spider-web effects, a Spider-Man mask, assorted spider-web shooting effect parts, and a themed dynamic figure stand.

Marvel fans actually had some big questions about Spider-man using mystical powers, after the first Spider-Man: No Way Home LEGO sets revealed the new costume designs. One LEGO set was Doctor Strange’s Sanctum Sanctorum and showed Spider-Man using what appeared to be the same kind of mystical enchantments as Doctor Strange and the Master of the Mystical Arts. The question was whether those mystic powers were an actual part of the movie or just a feature of the toy set – but now the Hot Toys info may tip the scale.

The rumors about Spider-Man: No Way Home point to a breakdown in the Marvel multiverse resulting in Tom Holland’s Spider-Man having to team-up with his own variants (Tobey Maguire and Andrew Garfield) to battle a multiverse collection of Spider-Man movie villains (Green Goblin, Doc Ock, Electro, Vulture). With Doctor Strange (Benedict Cumberbatch) being there to back Spider-Man up, Peter Parker getting a mystical upgrade may be just the kind of arsenal he needs to win the fight.

Spider-Man: No Way Home opens in theaters on December 17th.