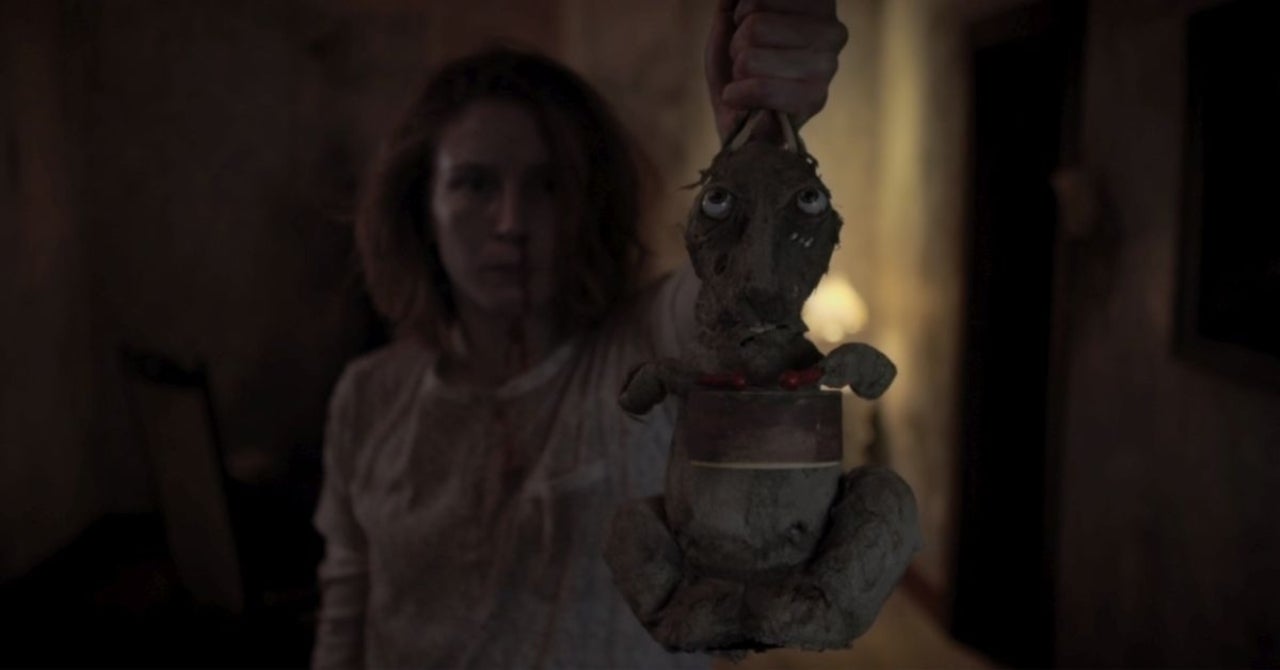 Writer/director Damian McCarthy’s debut feature film Caveat taps into three of our biggest fears: isolation, the dark, and sticking your hands into something when you can’t see what’s on the other side. A tense and skin-crawling film, Caveat is seemingly inspired by the framework of A24 style haunts like Hereditary, delivering an experience that builds upon its narrative until it has caught you in its sinister web. Caveat never settles for the cheap scares, either, only throwing one at the audience when it absolutely knows that it will work, and, even if some of them are expected (and also never explained), they’re almost always blood-chilling.

Ben Caplan stars as Isaac, a drifter pursuing an easy buck after being recruited by his landlord (Jonathan French) to look after his niece (Leila Sykes) at her family’s isolated island home. Naturally, there’s a “caveat,” and it’s a big one. Caplan’s character is forced to wear a harness tied to a chain, preventing his movement into certain rooms of the house, while also caring for Olga who is prone to “schizophernic fits of catatonia,” prompting her to freeze in startling positions. Also, there are creepy sounds, an eerie rabbit toy, and potentially a dead body in the walls. The titular caveat is a lot considering his meager paycheck.

Among the most memorable things about Caveat are the images, constructed from striking cinematography by director of photography Kieran Fitzgerald. I don’t have percentages, but it’s largely a silent piece, with some dialogue interspersed between, yet the lack of constant talking by its characters opens its visuals to the audience in a unique way, since it’s the only language that we’re getting from it in major sections of the story. Some smaller films fail to make an impact due to confining themselves into a single space, but Caveat is able to wring every drop of tension and potential scares out of its house without feeling stale.

To the detriment of Caveat is that it doesn’t make much sense when its plot is held up to scrutiny. At times, it feels straightforward but some twists and later reveals feel convoluted, and the elements of its spooky story that work the best and are actively scary are the ones without an explanation. Caveat takes both the less is more approach while also over-explaining itself to a negative degree.

Some viewers may find the unexplained elements frustrating, though, in truth, the mystery is what gives them their power. If we found out the how and why of the thing haunting this house, it wouldn’t be scarier than when our imagination is able to fill in the blanks instead. That mystery, coupled with the surprising scares, is what elevates this idea from being good material for a short to justify its feature length.

Caveat is riveting, at times, and frustrating at others; yet it‘s ultimately a fun, spooky time, with the kind of startling images that will make your blood run cold and draw a “did I just see that?” style scream. The loose narrative that it has works best when it’s not explaining what’s going on, which is about only half the time. The story isn’t what you’ll remember, as that would be the startling scares that occur in its final reel, the tremendous visual language of its DP, and the fact that no one speaks for about half the film.

Caveat will stream exclusively to Shudder starting on June 3rd.

The full Strawberry Moon, the last supermoon of 2021, rises tonight! Here’s what to expect