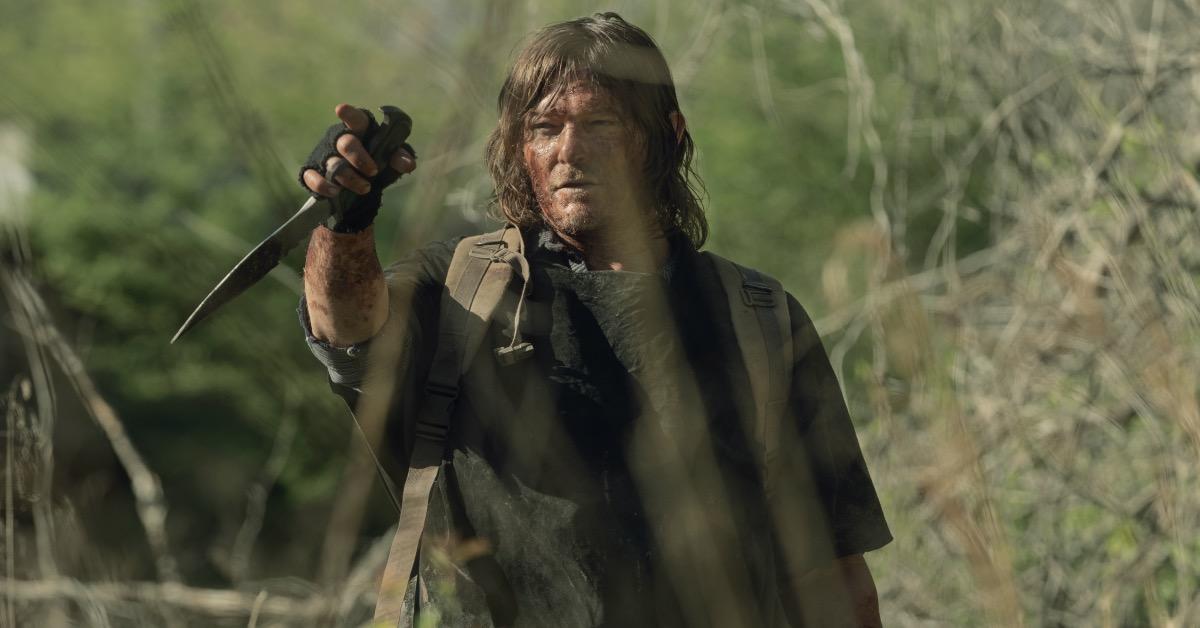 The Reapers attack. Daryl sics Dog on a fleeing Reaper and follows into the woods. Daryl fights off a skull-masked Reaper. Dog sinks his teeth into the enemy. The Reaper grips Dog by the ears and throws him down a hill. Daryl screams and goes after a whimpering Dog, escaping with a knife throw that just misses the three Reapers on his tail.

The next day. Daryl plunges his hands into rotting walker guts. Covered in grime and gore, Daryl searches for Dog. Stalking them is a red-and-white masked Reaper cloaked in black.

Dog barks. He sits next to the grim Reaper. Daryl unsheathes his knife and the Reaper unmasks herself: it’s Leah. Daryl told Leah to find him years earlier in the Season 10 episode “Find Me.”

Ain’t One of Them

“I never thought I’d see you again,” Leah says. Daryl thought the same. Leah wants to know who he’s with. She saw him out on the road with others — who are they?

She aims her shotgun. “You one of them?”

Daryl tries to take Dog and leave. “I don’t know who you’re fighting, but I am not part of it.” Reapers surround him. He’s not going anywhere.

A bound and hooded Daryl is dragged into Meridian.

It’s Leah and Daryl alone in a dark room.

“I came back for you. I looked everywhere for you. I’m sorry you ended up with these people.”

“These people are my family. They never stopped looking for me. When they found me, I came home.”

She asks about his family. The ones he told her about.

“My family picked the wrong fight with the wrong people a long time ago. It’s like I told you, I’m alone.”

Leah wipes down a filthy Daryl. It’s gentle until she gets behind him and smothers him into unconsciousness. He wakes up in-between coughs and gasps for air as Leah’s Reaper brothers waterboard Daryl. They want to know about the group he was with on the road.

Daryl drowns. Leah orders they put a stop to it. She pulls the sack off his head and looking him in the eyes, tells him she needs him to talk. “The one we answer to won’t be so nice.”

Daryl lies: “I traded with them. They gave me some food. I hauled some gear. I knew them less than a week.” He’d rather die than give up his family.

The Reapers drag Daryl into a dark cage. His cellmate across the way is Frost (Glenn Stanton), one of the last surviving members of the Wardens.

“Daryl? Is that you? The others… are they okay?”

Daryl shuts him down. I don’t know you or them. All part of the act. Frost plays along.

It’s later. Leah visits the “stubborn, hard-headed” Daryl locked up like an animal. She wants the truth.

She asks again: “What do you know about those people?”

“Is that what you want?”

The sobs of Bossie (Michael Shenefelt) echo through the halls of Meridian. Turner is dead and he tried to save him.

Pope (Ritchie Coster) consoles him. “You did the right thing. You brought him home.”

Mancea (Dikran Tulaine) prays for their fallen brother. He speaks in tongues over Turner’s corpse.

Pope steps out of the shadows. “God is here. He’s angry. I’m angry,” seethes Pope. “Do you feel that? Go make them feel our wrath.”

Leah visits Daryl’s dingy cell and sits outside. She mourns the death of Michael Turner, the little brother she never had. They fought all over the world together, until Pope started his company: the squad of mercenaries that Maggie’s group came to know and fear as the Reapers.

“This is the first time I’ve lost someone close to me in a long time,” Leah tells Daryl. “Well… except maybe for you.”
“You didn’t lose me. I came back and you were gone.”
“You left me. I asked you what you wanted. You left.”
“I got scared.”
“Of what?”
“Letting go.”

Leah can help Daryl save himself. “Because despite everything, I still care about you. And I don’t want anything bad to happen to you.” But she needs intel. “‘Cause if you can’t, I can’t control my commander and what he’ll do next. He’s angry about Turner, and he wants someone to pay.”

Daryl says there’s a woman, she’s the leader. They spoke in code because he’s an outsider. There’s a tall skinny guy who never shuts up, and a shotgun-carrying priest. But they have the numbers, Daryl says, claiming there are three dozen fighters – way more than the 15 soldiers they’ve got here.

What You Were Looking For

Leah reports to Pope, sharpening his blade: they have more than twice the force we have in here. Leah vouches for Daryl. With Turner gone and Nicholls (Hans Christopher) and Montanio still missing, they could use the manpower. Pope says nothing. Just the scraping of a knife.

Finally, Pope speaks: “Tell me. Did you find what you were looking for?”
“I told you he would be useful, and I was right. He’s a lot like us. Pain doesn’t scare him, death doesn’t scare him. Carver saw it. You see it.”
“I just see a guy who wants to get in your pants.”
Leah scoffs.
“You could’ve ended him out there today,” Pope points out, “and you didn’t. Why?”
“At one point, he meant something to me. I’ve been open about that. But it ended the day you found me and I chose this family, and I have never once regretted that decision. And I don’t want you to, either. Do you?”

Pope strokes her chin. “I believe in you. More than the others. You think we can trust him?”
Leah says yes. Pope wants to see for himself.

A trio of Reapers leave Daryl and Leah alone in the interrogation room. Pope is on the way. The splashing of liquid, a rattling bucket, a locked door. The room goes dark. A lighter clicks and the room is engulfed in flame.

Pope and his Chosen Ones stand watch. Leah rejoins them without a word.

“Forged by fire. Ordained by God,” preaches Pope. “Welcome him!” In unison, The Chosen Ones recite: “Fortitudo Saludis!”

In his quarters, Pope asks Daryl if he believes in God. Daryl says not anymore. “Guess I just believe in me now.”
“That’s a mistake,” replies Pope. “Because you’re not Him.”
Daryl passed his test. What now?

Pope sits Daryl down. He sermonizes.

The Chosen Ones met in “the Valley of Death”: the hills of Afghanistan. The soldiers and their fallen brothers were left behind by politicians, Pope says: “They didn’t know God. They never saw His face. It’s not like we did. We saw God everywhere. He was in the blood and the horror and death. He was there, telling us where to go. Didn’t have much else to hold on to in those days but Him. And each other.”

PTSD-ridden soldiers returned home, injured and unable to find work until work found them as mercenaries. “We did all the ugly, dirty work nobody else wanted to do.” But the real dirty work started after the outbreak, after the fall. Pope’s unit had to run through the fire to save their own, miraculously escaping without blood or a scratch or a burn.

“That’s when I knew. We were the Chosen Ones. These men… these men upon whose bodies the fire had no power.”

Outside. The family sits around a fire. Pope tells Leah she was right about Daryl and orders him fed. “He’s family now.”

Pope commends Bossie for walking ten miles with his dead brother on his back. 10 miles. Turner will have a proper burial.

Pope has just one question: “Your wounds… are on your back.” He wants clarity. “Where were you when Turner was getting attacked?”

“Human nature is to run when you are scared,” says Pope. “You know what that’s like, right?” He looks to Daryl.

“It takes divine strength to face your fear head-on. Risk everything for someone else. We all saw what you did. Getting Shaw out of the fire first, and you felt it, huh? How far he would go just to keep you safe. Today, God baptized you in that fire. Made you one of us. You see… there’s one thing I forgot to tell you. Never turn your back on your brother. God doesn’t only use fire as His baptism. It’s also His wrath.”

Pope grips Bossie and throws him into the open flame. Bossie burns and screams. Pope’s boot keeps him pressed into the fire.

Follow the author @CameronBonomolo on Twitter for all things TWD. The Walking Dead Season 11 airs Sundays on AMC.