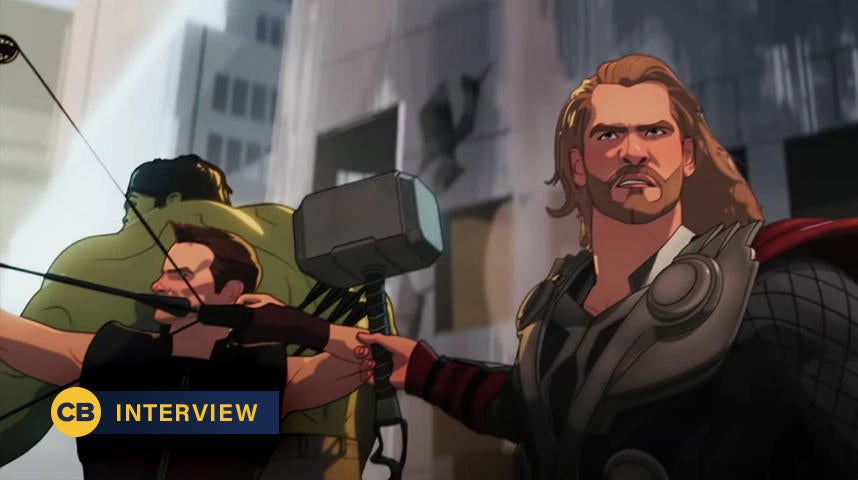 Stephan Franck has had his hand in helping develop some of the biggest animated offerings of this generation. The artist has credits on The Iron Giant, Osmosis Jones, 9, and Spider-Man: Into the Spider-verse. Even after all that, it’s his latest gig that’s arguably the largest of his career — supervising all animation on Marvel’s What If…?, the series officially serving as his debut in the Marvel Cinematic Universe.

We recently caught up with Franck to chat all things What If…?, and you can see our whole discussion below.

ComicBook.com: You’ve had a decades-long career in animation, but nothing really beats the Marvel Cinematic Universe in size of scope, IP, and all that stuff. You initially get the call from Kevin [Feige] or Victoria [Alonson] or AC [Bradley] or whoever you talked with initially, maybe Brad Winderbaum. What’s the initial thought that goes through your head? “Oh man, I’m working in the MCU.”

Stephen Franck: So, there’s a lot of thoughts that go into your head. The first thing is a general thing, which is that, I was saying I grew up in a comic book shop, it’s true, and also my dad was selling also Super 8 millimeter films of like the Jungle Book and so on and so forth, so to me, all of that stuff, French comics, American comics, movies, magazines, right? All that stuff was all one thing. There was never any separation. Then you get into the industry and the industry will do what it does and maybe things are segmented differently. So, you’re right. For me, the call of, “Hey, do you want to kind of talk about this project?” is… it’s the thing I’ve been wanting to do since I was 13 years old and I was doing an animated film of the spirits, they’re realizing their thing, you know?

And it’s like this combination of comic tradition and the film tradition, which are the two things I’ve been doing all these years, but never quite came in this way, and the fact that, literally, so just the adventure of it is new, but we’re able to do it in the way that the presentation of it is new. We’re doing it on a new platform in a new… The look of the show is unique and stuff like that. So it’s new on the inside. It’s new on the outside, is just super, super exciting.

And then the first thing is like, “Oh boy. How am I going to do justice to this?” And you come into a team of filmmakers that have such a history of making these movies, so they know their characters, their stories so well that you have so much to learn from them. It’s very… It’s extremely nourishing a little bit nerves making at the beginning and then little by little, you can absorb it and you get absorbed into it, then whatever it is, then you’re just doing it. You know?

At what point of the production process are you brought on? We know that animation takes substantially longer than something in live-action, but by the time you come in, were there scripts? Did Ryan [Meinerding] and his team have all the designs done? Are you working with Ryan on some of his designs and stuff and you focus strictly on animations?

The thing with the initial process is that it’s, indeed, segmented into different departments and different steps and stuff like that. But, of course, everything you do is coming from somewhere and has to go from somewhere, right? So when you’re designing characters, you’re not designing characters aesthetically, you’re also designing them in the sense of, “Well, how will they work in animation?” When you’re animating a character, then you also, “Yes, but how’s this going to look in color and comp?” and stuff like that. So, no matter your area of sort of expertise and sort of focus for the project, it’s still part of the holistic thinking where you have the entire thing in mind, and you’re fully invested in the entire thing, although you’re spending your day focusing on the execution of a particular thing.

So, for me, when I started on this project, the stories were already written and the style of the characters was already established. Not all the characters were created, but were already established. Then, I on the story side, before animation really started, I did some story boarding on the early episodes, a little bit of the end of first episode. I think I storyboarded the whole end of the third one, the whodunit one. So I did a bit of that stuff. And with Ryan, we’re really trying to work together in terms of that translation from design into animation, and just working, making sure that all the aesthetic choices, the technical choices, that it all works together as part of this holistic approach that goes from, as they say, first there was an idea and that idea is great, but it needs to go through a process so that it becomes a reality. And I think we’re all invested in this reality and working hand-in-hand to just make it happen.

One of the big draws of this show is that Marvel got the live-action counterparts to voice the animated characters for most of the cast and a lot of the time their animated characters look like real-life actors. How far did you guys go back? I mean, were you looking at the live-action movies to even get the animation to match the actual actors’ mannerisms and all that stuff?

What we’re really trying to get out of these characters is their vibe because they have a really well established vibe from the movies obviously. And so these are the characters we know and love. And so we have to start there and then get them through new adventures, new moments, new moments of choices, of choice and decisions and so on and so forth. But we’re definitely… Well, first a lot of the actors are reprising their roles, so we’re building on their vocal performance directly in the episode, and even if it’s new actors, they’re still performing the same character, so the vibe of the character is what matters. And this is what we’re trying to build upon. And so if it is in a moment, because, as you, as you mentioned, like our stories are completely they stem from the MCU, so we’re referencing a specific moment in the movies except life went into a different direction.

Then, of course, we’re going to try to match that moment as best as we can. So it’s that same fork in the road. Right? But even if it’s not the case, and if it’s just a new exploration of a new situation for this character, it’s like, you look at this character and it’s about who’s an extrovert, who’s more internal, who is more earnest, who is more sarcastic, what is their tone, what is their vibe, who says what they mean, who means what they say, who is not allowed to say what they know. It’s just like all the subtleties that make a performance, a performance and that has been so well crafted by these actors and we’re just trying to receive that and just continue building in that direction.

The first five episodes of Marvel’s What If…? are now streaming on Disney+.

If you haven’t signed up for Disney+ yet, you can try it out here. Note: If you purchase one of the awesome, independently chosen products featured here, we may earn a small commission from the retailer. Thank you for your suppor

Will Taylor Swift’s New Version Of ‘Wildest Dreams’ Outchart The Original In The U.K.?

One Character Had To Change Completely Before the Show Aired