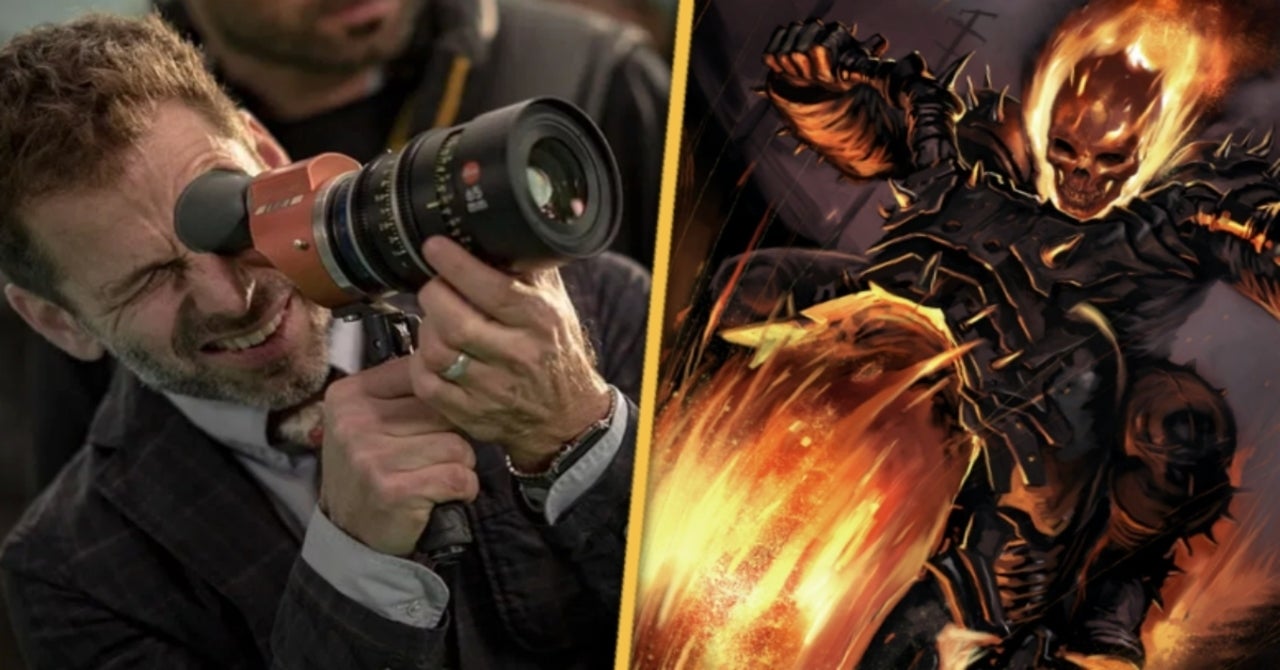 Zack Snyder says there’s no truth to rumors he’s being eyed to direct a rebooted Ghost Rider for Marvel Studios. The Man of Steel and Batman v Superman: Dawn of Justice filmmaker, fresh off the Dave Bautista-starring zombie heist movie Army of the Dead for Netflix, does not expect to return to the DC Extended Universe after completing and releasing his long-fabled director’s cut of Justice League. Snyder has revealed plans for an Arthurian Legend project in addition to his South America-shot Horse Latitudes, currently on pause amid the pandemic, but Snyder won’t be riding into the Marvel Cinematic Universe to fire up Ghost Rider.

“I have not,” Snyder told Tyrone Magnus on YouTube when asked if he’s heard from “DC’s rival.” Holding up a hardcover copy of Frank Miller and Lynn Varley’s 1990 graphic novel Elektra Lives Again from Marvel Comics imprint Epic Comics, Snyder added, “Remember, I’ve been going, ‘Oh yeah, we could do this.’ But no, I have not [heard from Marvel].”

A surprised Snyder then laughed off Internet rumors he’s being eyed to reboot Ghost Rider. “Oh, really? I don’t know that,” Snyder said. “It’s kind of fun, I gotta be honest. It’s cool, you’re like, ‘Oh yeah, no, Ghost Rider is a done deal!’ No. But no, it’s not.”

Nic Cage portrayed the Johnny Blaze incarnation of the character in the 2007 feature film Ghost Rider and the 2011 standalone sequel Ghost Rider: Spirit of Vengeance. In ABC Studios and Marvel Television’s live-action TV series Agents of S.H.I.E.L.D., Gabriel Luna played the Robbie Reyes Ghost Rider, who would have starred in a planned — but ultimately canceled — Ghost Rider spin-off series for Hulu.

Disney-owned Marvel Studios has not revealed plans for a rebooted Johnny Blaze Ghost Rider in the Marvel Cinematic Universe. Marvel’s chief creative officer, Kevin Feige, previously told ComicBook.com he’s “interested in all of them” when asked about exploring other genres of film, including western and horror.

“I love film. I love film, I love all different film genres,” Feige said in 2018 when asked about western characters like Two-Gun Kid and the horror-tinged Ghost Rider. “I certainly would like to play with as many genres as possible.”

Snyder previously named Elektra Lives Again as his ideal Marvel movie but the director has yet to meet Feige, the president and producer behind Marvel Studios’ so far 23-movie MCU.

Batwoman Confirms Bane, Clayface, and Other Batman Villains Exist in the Arrowverse